And checking it twice. That’s my MO and has been for many years. I make lists for every occasion. I’m not sure why it’s called a laundry lust because that may be the only thing I actually don’t need a list for. Lists are comforting and they give me peace of mind. At this very moment I have a few lists on the go. It’s a hectic time of year.

The other day I had a list epiphany in aisle seven at the Superstore. My friend and I went shopping after a cooking class (segue: it was a holiday brunch class that was very good!) and I was in the pasta aisle. I reached for a box of Barillo penne (my go to) and as I pulled out one, two more tumbled off the shelf. A man standing nearby chuckled. I glanced around and made a cheeky comment. He told me the other brand was on sale and waved a flyer from a competitor store. You price match don’t you? He asks. No I say back. I hear a sharp intake of breath behind me. It’s the shelf stocker and he’s looking at me with his mouth open. The chuckle speaks again: I’m Vince. I’m a widower and price matching saves me thousands every year! And then he launches into a detailed explanation on “how to”. I hear a tsk from stock man who wanders over with his smart phone out. Stocker has a better idea: just get the Flipp app. I’m in awe. This handy tidbit definitely puts my lists into a new realm of ticking! What a productive shopping experience.

I was quickly snapped out of my list lust reverie when my friend called to tell me she had already checked out and was riding out a hot flash on the bench outside the store in case I was wondering. Yikes. I was so caught up in the pop up flyer workshop in aisle seven I lost track of time. Now that’s the random beauty of retirement!!

Rudy relies on my lists. If we are going on holiday or any mission out of the routine I make a list. Next week for example we are dropping Otto the cat off at his winter retreat in Toronto. Cats need a list. That is Rudy needs a list for the cat mission. Without a list we might forget something and that’s another matter. List-less anxiety is totally avoidable. Just make the list and check it twice.

Who knew Santa was so clever?

My favourite lists are menus. I love to create menus and plan eating extravaganzas. I think people gathered around a table enjoying delicious food and drink is the most extraordinary experience. Conversations and connecting while dining is an intimate act and you can find out so much about people. Everyone’s true colours are on full display while they eat. Try it next time. Watch closely while others eat. Just don’t stare rudely; people will think you’re weird.

Some lists are done in a flash while others are a work in progress. Shopping and daily agendas are easily done over morning coffee. Gather your thoughts fuelled by caffeine and sort out your day. To do lists on the other hand are created over time. I keep a running minor repair list for example. Then it’s ready on a moments notice when an unsuspecting guest (Rudy’s handy friends or my brother in law say) comes over. Well, Frankie (my brother in law) is on to me; he’s prepared and brings his tools. Smarty pants.

Moving and packing are gigantic lists that combine to do and everything else rolled into one. This monster list will cover everything from Canada post instructions to travel insurance to house cleaner notes. The list has sub-lists and arrows. It’s intricate and complicated. But when it’s done and you’re sitting in the car with your belongings and the dog not to return for over 4 months it’s a necessary safety net. Like a child’s blanket. Messy and worn but comforting nonetheless.

I sleep at ease knowing my lists are safely tucked into my device. And I can check them anytime. Santa’s lucky he only needs to check his twice. I’m a little more neurotic. 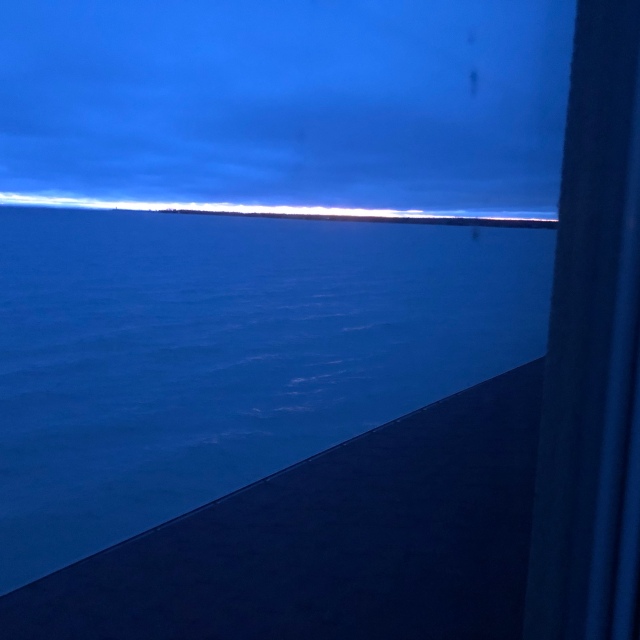 I tried to capture daybreak on my camera. It’s a work in progress.