It’s a thing. In some places it’s like a ritual. Meditative. For me it’s inhaling the scents of nature while quietly enjoying taking Molly for a walk. We are lucky to have such great walking trails in our area minutes from the front door. My favourite is Nippissing Ridge. It’s a windy forest trail that runs alongside the runoff creek spilling melted snow in gentle waterfalls from hill to bay. It’s usually deserted. Sometimes, like the other day, we meet other dogs and their humans.

It starts at the Georgian Trail near the Macs Milk and winds lazily behind beautiful custom monster homes on a gentle slope upwards to the end near Alpine Ski Club. The path itself is crushed stone (now still mostly leaves from last fall that were covered in snow) with native shrubs and growth on either side. And, of course, the gurgling creek. There are a variety of birds making their home here. And the squirrels and rabbits which keep Molly fully on alert. We know there’s also coyotes because we see the droppings. But we’ve never seen the actual animal which is okay with me.

What I also enjoy is the decaying fallen wood pieces. Stumps, bark, branches, twigs and vines that create interesting art forms as they lie knotted and twisted where they fell. And the moss! It grows in such amazing colours and shapes on almost every surface.

The path is managed by installed culverts and drain pipes to direct the flow of water. So you can stand on the path as the flowing water rushes past underneath you. The sun easily peeks through the still barren tree branches and adds a whimsical sparkle to the water and soothing warmth to the chilly spring air. The water glistens as it twirls on its way to the Bay.

It’s a buffet for the senses. In your moments of wondrous admiration you have to be mindful to remember to breathe. Such fresh, healing air.

From beginning to end (you turn around at the top or walk back down through the neighbourhood) it’s only a few km – about 5,000 steps. But it’s exhilarating. And Molly loves it, too. 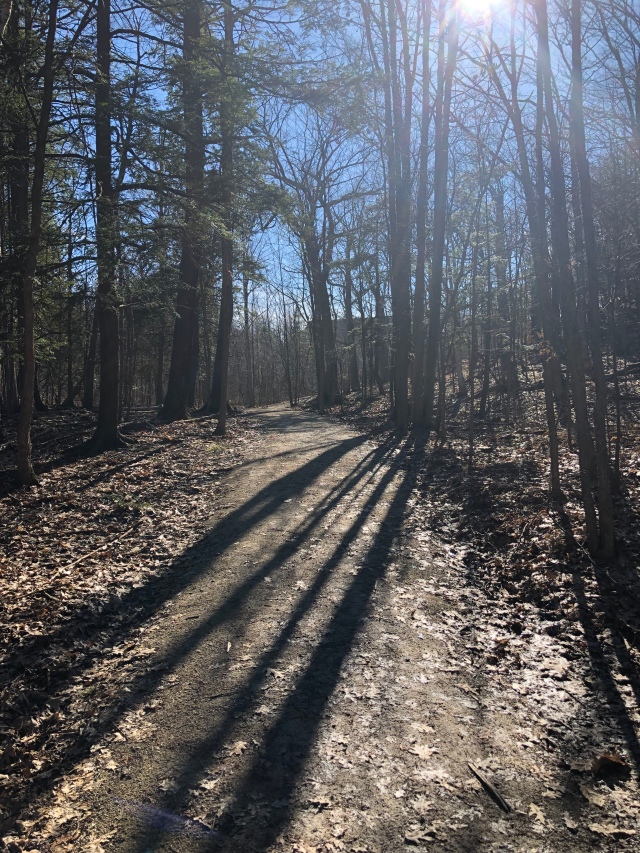