The ship docks for its final time (for us) at Amsterdam. The bustling port is busy with activities moving people and supplies. The disembarking is slow. The reasons are varied: elderly passengers, only 4 immigration officers (who seem to like the fulls day work) and only one escalator to reach the crowded immigration queue. We are not in Florida anymore (where they have ship processes down to a science). Adding to the mix is the full gray morning weather which is exasperating the scents of diesel and colognes. Overpowering smells are like pungent walls closing in.

Once the immigration hold up is over the outside security team has taxis hopping. We collect our bags and and are whisked quickly into a taxi. The driver (seems that every country has foreign taxi drivers) reads the address of the hotel from my phone and acknowledges verbally. Between his accent and the strange Dutch name we hope he’s on track. Either way we settle in to the seat and enjoy the quietly playing classical music. My mind is juggling the strange reality of the situation: we are in transit from our temporary comfort zone on the ship and heading toward our next adventure while Mozart is playing … I try not to conjure up a scene from any spy thriller movie.

We arrive at our hotel and it’s around 11 am on Sunday morning. There’s no false hope that our room will be ready but we are eager to unload our bags. The hotel clerk speaks a staccato broken English and it’s hard to keep up. Yes. Charge the card. Yes. We can book tickets through you. Yes. We need wifi. Yes. Yes. Yes. He’s firing questions a mile a minute while staring into his big computer screen. I take a moment to glance around as he moves us aside to deal with the next customer. Clearly we didn’t work at his pace. The lobby is bright and cheerful with a modern twist that is an interesting contrast to the building which is tall and skinny (like a townhouse) wedged amongst other old similar structures. There’s a small coffee area and every inch of space is utilized with the greatest efficiency; there’s a cubby for every essential in the self serve beverage built in that’s a sleek white lacquer and glass. There’s nothing bulky about anything.

We finish with the clerk who prints tickets for the hop on/hop off bus and boat and stores our bags. He rapidly circles points of interest on a city map and shows us where we are. We are a block from the Rijks Museum.

Heading out we learn something quickly and,thankfully, without incident: everyone here rides a bike. There are bikes parked and locked up everywhere (including our hotel which offers rentals). There are designated bike lanes and if you’re not paying attention you will get trampled. There’s a car lane and a bike lane and a pedestrian lane. Bikes take precedence.

The hop on bus is a short walk away and we get to the pick up point. The sky has lightened a bit but the air pressure is still low. Smells and sounds are trapped under the gray dome. Most hop ons are open at the top level, but this one had a plexiglass cover. We take our seat and I try to open the window without success. Earplugs are provided and there’s audio in 16 languages. Amsterdam is built around the water like a spiderweb with streets and canals making up the spokes. At the first opportunity we move seats to sit next to an open window. However, fixing one issue has created two more: the couple behind us are coughing and the man in front of us bathed in Axe cologne. It’s a sandwich from hell.

Almost a full circle later we hop off and enjoy a light snack and coffee at a cafe. Not to be confused with “coffee shop” which is code for canabis store and bar. We walk the area and enter a coffee shop called “Rookies”. When you go to the counter a “barista” shows you their selection of weed on a menu and you can also smell the product before buying. Very cool.

We circle back to the stop where we climb on board the canal boat for a tour. The sun has finally broken through the gray and starts to warm the air. On board the canals we are amazed at the water traffic. Loads of boats of all sizes are cruising the canals. We stay on board for the entire city tour and love it.

Once we hop off we stroll the designer street. Yorkville on steroids. We end up at cute restaurant for a drink, rest and snack. By now it’s after 3 pm and our room will be ready. We head to the hotel.

Like the lobby, our room is a showcase of modern efficiency. A colourful modern room with an elegant bathroom including a massive soaker tub. The Dutch have their priorities straight!!

Before we turn in we walk to a nearby park and make use of our purchases from Rookies. When we return to the hotel we grab a few drinks from the self serve bar and start to wind down. Our last night before home. Hard to believe. 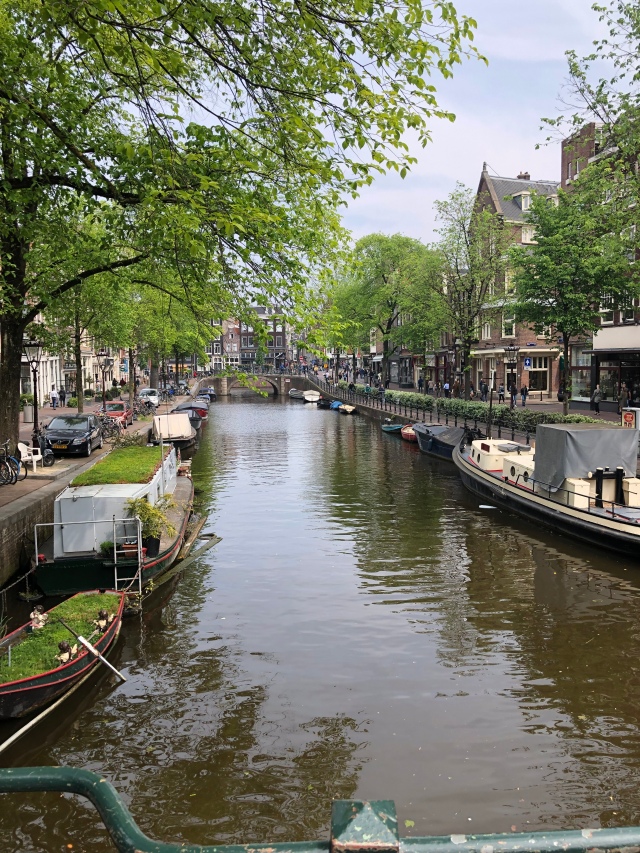 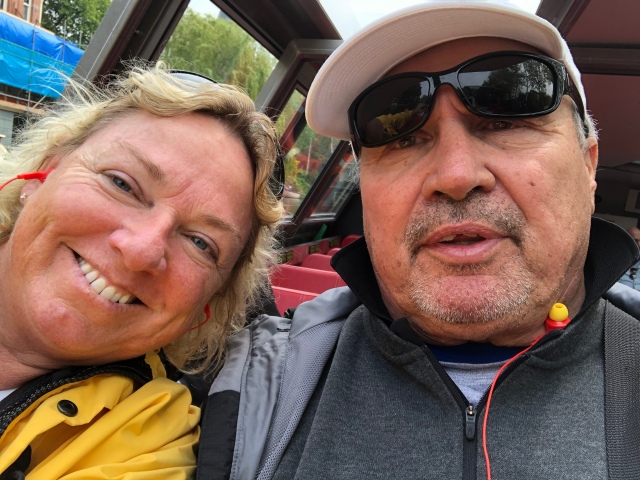 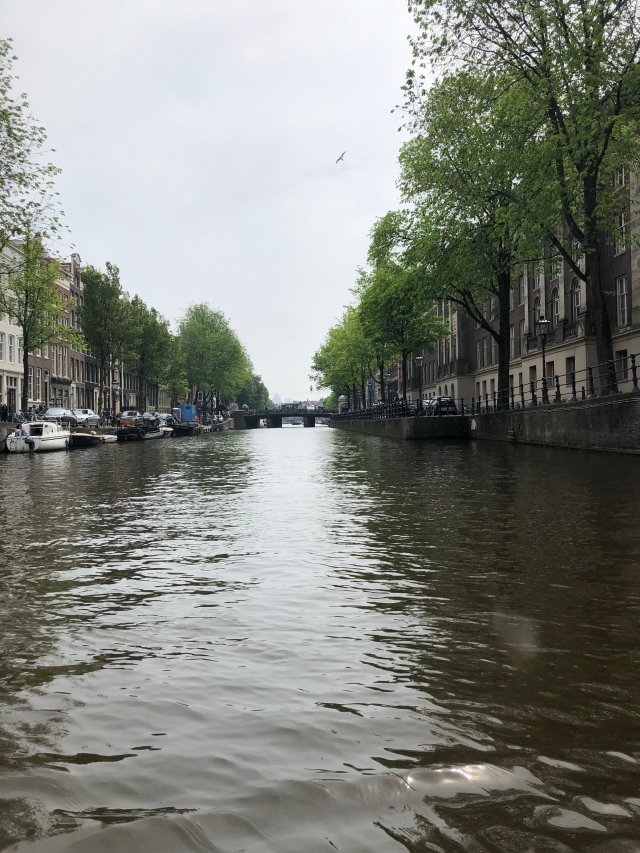 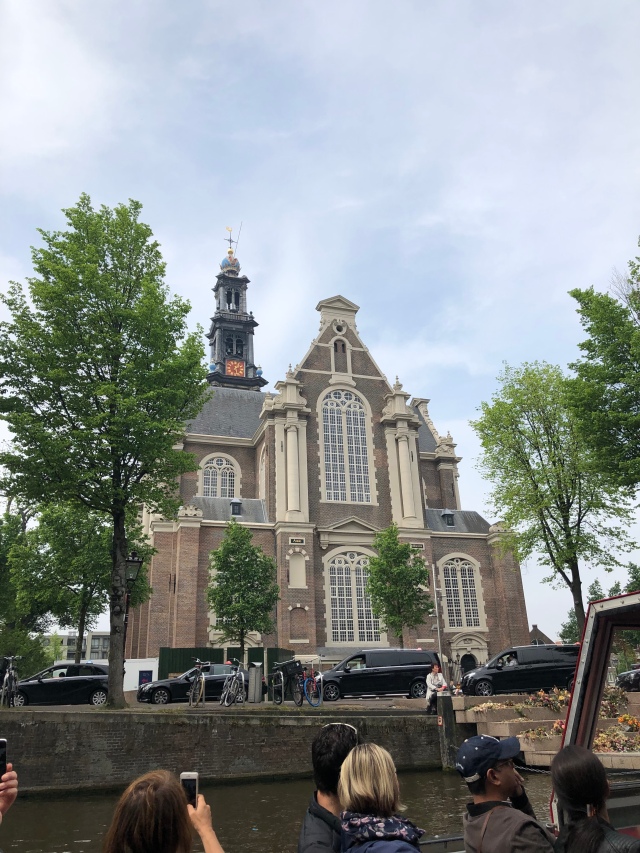 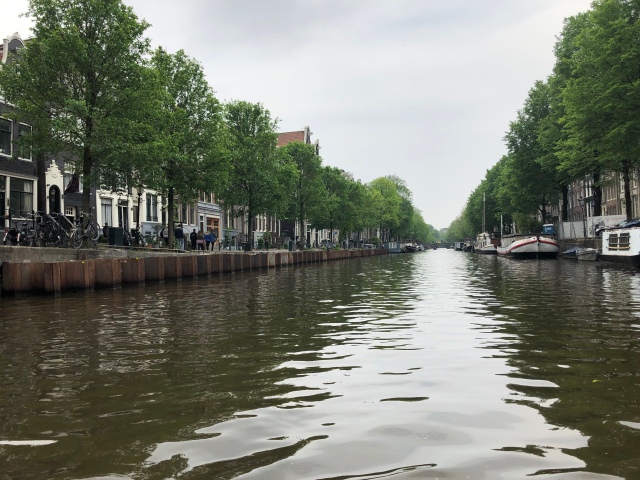