Yesterday we had a 50th birthday adventure for my friend organized by her partner. He was clearly trying to make the very most of a surprise day. I think he pulled it off beautifully. There was definite surprise to see friends drive up to the meeting point. But it was the venue that was the most surprising. Esther the Wonderpig Sanctuary.

I follow Esther on social media because it’s a positive and uplifting story. Two gay guys (one in real estate and the other a magician) living in a small town accept a rejected micro pig into their home. It turns out it’s not a micro pig, but,rather a full grown 800 lb hog. Her name is Esther. As a piglet they became a family and Esther lived indoors with the family’s other domestic pets. But Esther was huge. Too huge for their house. By now they had a following as they shared the chronicles of Esther far and wide. The beauty (at least in this case) of the internet. They crowd funded the purchase of a country home and as more rejected creatures were dropped on their doorstep, a sanctuary was born.

People were enlightened and inspired. Volunteers came in droves to work, help, feed, garden and pay for the project. The whole concept gives people hope. And a renewed faith in the loving spirit of mankind in a brutal world of greed and corruption. It’s the cup half full. Optimism versus doubt and negativity. Esther could have easily been bacon.

The sanctuary has many facets all nicely laid out on a winding trail covered by wood chips. Having used wood chips on our farm years ago I can appreciate just that one tiny aspect. The sanctuary was overloaded with work as I could see. A gated bunny village completely encased in wire and netting for their safety from predators. A pig sty fit for any regal swine complete with huts, big and grazing areas including a shady forest for foraging. A goat and lamb area with a climbing tower and room to roam. A horse barn. A cow paddock. Peacocks and an assortment of other fowl. Including three feathered friends: Jesus, Jerry and Joseph.

All of the animals are named when they arrive. It’s their new “freedom” name. The volunteers buzz around us as we walk through the property. Some are picking up waste (animal and human) or feeding or mending. It’s a hive of activity. Volunteers come in groups also; team building for corporations doesn’t mean bowling anymore! You can shovel shit with your colleagues!

Aside from the sanctuary there’s a whole other piece to this place. A thriving enterprise about Esther. Children’s books. Best sellers I might add. A movie in the works. Hollywood I might add. Apparel for the worldwide Esther fans. The marketing genius is astounding.

We didn’t get to see Esther in the flesh. Apparently she’s temperamental and likes to chill inside with her sidekick Phil the dog. We did see Phil through the window. Their other buddy, Corno the turkey, was outside pecking around. If you follow Esther on social media you’ll see the three musketeers and their antics accompanied by witty subtitles supplied by Derek and Steven the owners.

As usual, what made the day that much more amazing was the weather. I don’t think we would have been as gobsmacked about the whole thing if we were covered in mud and wet. Also to spend a few hours in a completely unique setting with friends was fabulous. Our tour guide Rachel (a self proclaimed Esther groupie) was enthusiastic and passionate; she spoke honestly and thoughtfully. A definite nice break from election drivel!!

I walked away from the sanctuary event with the following thoughts:

Thank you for including me. It was great! 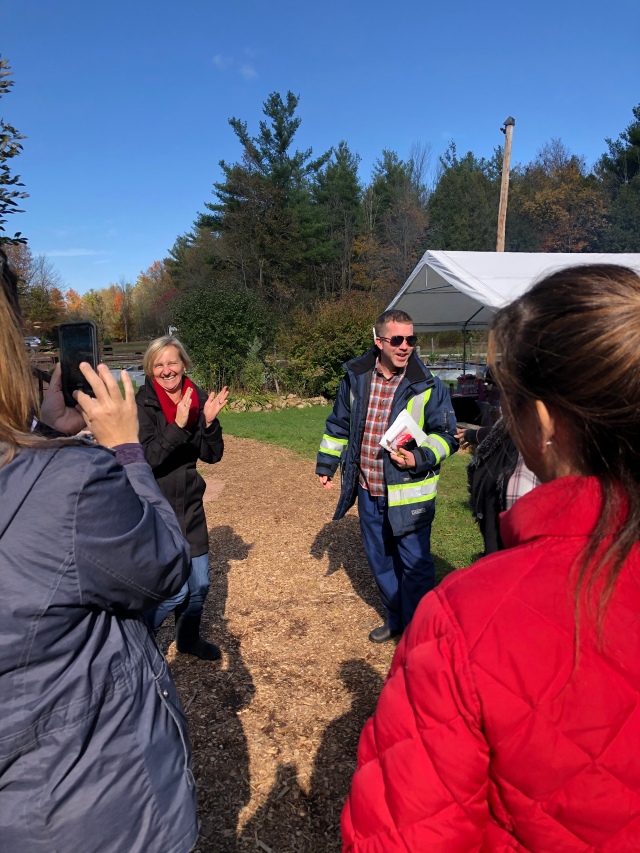